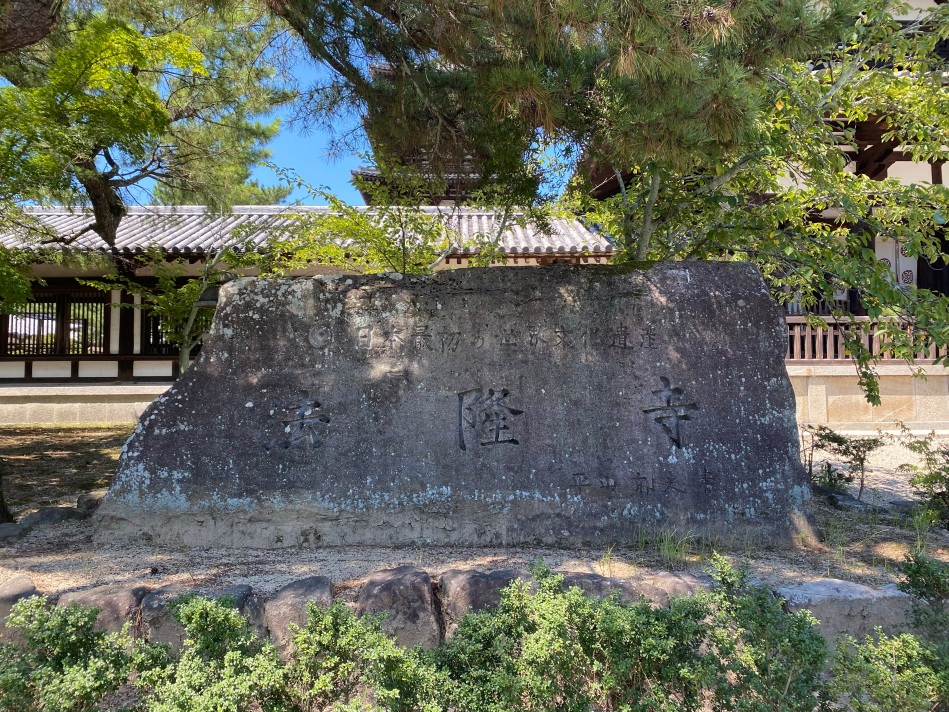 Nara Prefecture ー Yesterday, August 20th, marked seven years since I first came to Japan. At that time, I was only 15 years old and had no idea that a one-year exchange would turn into a five-year university program. A lot has changed over the past seven years, but my desire to learn more about Japanese history and culture has stayed the same.

Another constant is the burning heat of Japanese summers. I vividly remember stepping off the plane in Miyazaki to a wall of humidity, and this summer is no different.

A combination of the summer inferno, a pandemic, and ban on travel has led to deserted tourist attractions around the country. While this has vast economic implications that shouldn’t be ignored, it is nice to see old temples and landmarks without flocks of tourists.

This past week, I took a day and went to Horyuji, a Buddhist temple in Nara. The temple is located outside of central Nara City, but is well worth the detour. It is easily accessible by train or car from Osaka as well.

Horyuji was designated a World Heritage Site in 1993 and immediately upon arrival, it is clear why.

A long path framed by a row of trees leads up to the central gate. The gate is flanked by two of the oldest Kongo Rikishi in Japan. Also known as Nio Protectors, the Kongo Rikishi are Hindu gods who have been incorporated into Buddhism and variations of these statues can be found throughout Japan.

The statues are said to ward off evil spirits with their menacing looks. If you look closer at the fine details, you can see that one of the statue’s mouth is open, while the other is closed. This is said to represent life and death, the beginning and the end.

Upon stepping through the central gate, there is a large courtyard (the Western Precinct) with a five-story pagoda to the left, the main hall to the right, and a lecture hall in the back.

The central gate, main hall, and pagoda are thought to be the oldest wooden structures in existence. It is said that Prince Shotoku built the temple in 607 (Asuka Period) to help Emperor Yomei recover from his illness. After burning down, the temples were rebuilt in 670 and have been maintained ever since.

Despite having been built during the Asuka Period, the buildings differ from other structures built in the same era. The architecture was greatly influenced by Korea and China, in particular the Kingdom of Baekje and is considered conservative for this period.

The fine architectural detailing on the buildings is incredible, and I find something new every time I visit. Lately, I’ve been fascinated by the various circular tiles that line roofs of old buildings – they are much more interesting than it sounds!

The tiles are known as gatou (sounds like the French word gâteau) and there are endless variations. There is a great website that explains traditional roofs in more detail if you’re interested.

Another architectural feature of many Japanese buildings is wooden carvings. Unsurprisingly, the oldest wooden building in the world does not disappoint.

The main hall is donned with dragons which wrap around wooden pillars found at each corner. In the picture below, you can see the intricate detailing of the dragon and the building in general. It’s remarkable to think that these buildings were crafted without modern day technology.

After exiting the Western Precinct, there is a museum, called the Gallery of Temple Treasures, which houses artifacts from the sixth and seventh centuries.

While it would take days to write about all of the artifacts, there is one that must be mentioned. The Kudara Kannon is representative of Buddhist statues from the Asuka Period and is almost always a part of the Japanese history curriculum. The history of the statue is clouded in mystery, but its design and the materials used suggest it was created in Japan.

The temple’s official website has more information on its history, and if you speak Japanese, you can have a look at some of the artifacts displayed in the museum.

The Eastern Precinct is separated by a long (and excruciatingly hot) path. On the left side, there are buildings that are still used for various ceremonies.

The Eastern Precinct is home to the Hall of Visions (yumedomo) which was built to assuage Prince Shotoku’s spirit in 739. Its distinct characteristics are the tall foundation and octagonal shape. The structure was renovated in the 1200s, but retains most of its original character.

Though I had been to Horyuji before, it was surreal getting to see it without crowds of people and the endless clicking of cameras. It was such a calm experience to sit on the stone steps and appreciate the architecture and history while trying to imagine what life must have been like 1300 years ago when the temple was built.